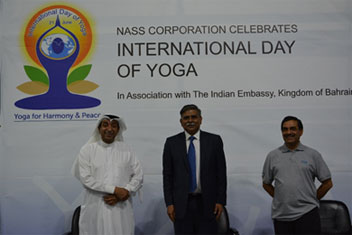 Manama, Bahrain
Nass Corporation in association with the Indian Embassy celebrated International Day of Yoga on Monday, the 19th of June at their Mina Salman Headquarters.

Mr. Sameer A. Nass, Chairman of Nass Corporation welcomed H.E. Mr. Alok Kumar Sinha, the Indian Ambassador to Bahrain on this occasion and thanked him for his kind gesture in attending the event.

Mr. Hemant Joshi, Director of Nass Group inaugurated the event by thanking the Indian Ambassador and the Indian Embassy for facilitating the event. He said, ” The ancient practice of Yoga has helped millions of individuals across the world in achieving holistic well-being. In addition to the positive health benefits, Yoga has mental and spiritual core.”

“Nass group has over the years conducted itself in a manner that corporate social responsibility, community development and employees’ well-being have been accorded highest priority and its celebration of this Yoga event is a manifestation of that culture “, he added.

H.E. The Indian Ambassador highlighted immense benefits of Yoga and appealed to all to continue practicing and promote it such that its benefits are reaped by all.

The event was a great success with more than 120 attendees, employees and their family members participating in the event. 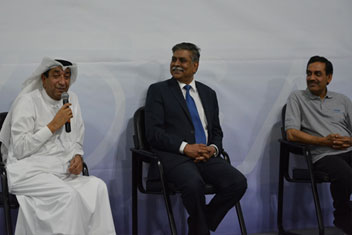 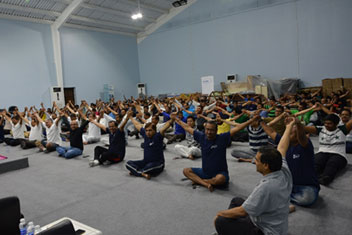